5 Tips To Conquer Your Motorcycling Fears 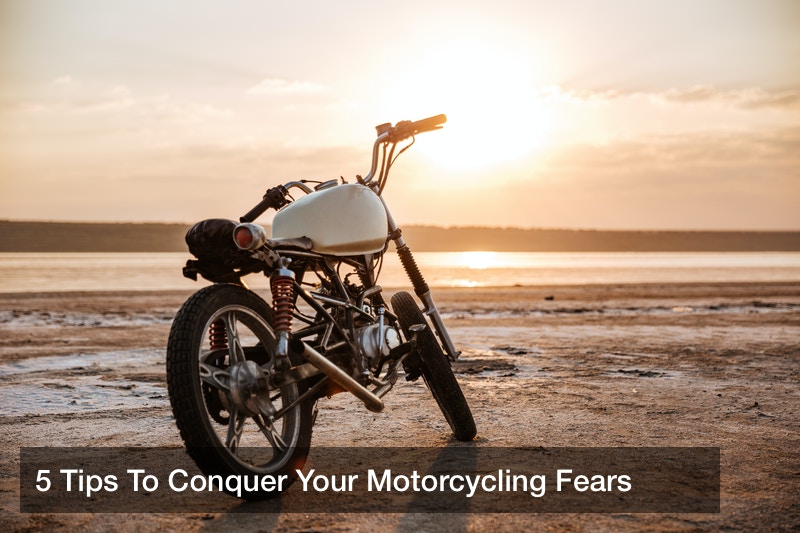 Are you procrastinating on dirt biking?

Fear is usually the cause of procrastination. It’s not only about the fear of injury but most of the time, it’s more about the fear of humiliation. But did you know that every professional dirt bikers have their fair share or two about crashing?

As a matter of fact, this is an essential part of this activity. It’s actually what makes it quite popular. Did you know that up to 472,000 motorcycles were sold in the U.S. in 2017?

Motorcycling on dirt is not exactly the same as when you do it on the pavement. Operating your clutch is the same, but how you ride your bike is quite different. The motorcycles themselves are designed differently.

Dirt bikes are furthermore subdivided into 2 types. There are high-performance ones designed for motocross, and then there are trail bikes. At first glance, they look almost exactly the same, though.

For beginners, trail bikes are your best options. You can always ask your motorcycle dealer about specific models or the latest popular ones.

Now that we’ve got that sorted out. It’s time for you to get down and dirty with these essential tips to up your motorcycling.

Dirt bikes have clutches. Its use is the same as when you’re driving a car, which is essentially for shifting gears. However, it’s more forgiving.

There’s no such thing as a “clutch driver” in dirt biking. You can ride your bike and make a turn pulling the clutch halfway without ruining it.

2. It’s About The Way You Stand

How you sit on your dirt bike dictates the possibility of a crash. You should ride it standing with your back straight, placing most of your weight on your feet. This stance aggressive stance helps you to easily ride the bumps on the road.

You should also be squeezing your bike with your knees for added balance and control. So basically, it’s more about standing on your bike than sitting down. The time when you actually sit down with all your weight is when you’re parked and resting.

You need to wear all your gear. It’s not about looking good, but it’s about being safe. Since you’re a beginner, the likelihood of a crash is higher.

Even professionals wear their complete gear when riding. When you’re motorcycling in full gear, the potential for injury is significantly lessened.

Be sure not to go cheap on helmets or boots, though. They may be the most expensive part of your gear, but they are the ones that work overtime to keep you protected.

Up to 75% of motorcycle accidents involve a collision with an automobile and helmeted riders suffered fewer neck injuries compared to un-helmeted riders. This doesn’t even include riding on rugged terrain, where crashes are more likely to occur.

Ride out as often as possible. This is where the actual fun is, and not in just watching competitions or stunt videos.

If you do this on a regular basis, you’ll improve your form faster. You’ll become more confident and your instincts are honed quickly.

You don’t really need to expect a crash because it naturally happens every now and then. As a matter of fact, the more you’re anxious about it, the more it’s likely to happen.

If a crash happens, don’t dwell on it. Learn from it and then move on. Just like your bike, just go through the bump.

Get Better with Motorcycling

Follow these tips and get better at riding your bike in no time. Motorcycle dealers in Michigan as well as in other places usually know about local dirt groups that you can join to help you learn faster.

This is only the beginning. Take a moment to explore our other articles on the site to help you get even better. You’ll not only get better at riding your motorcycle, but you’ll even find some tricks to boot.

If you’re just getting started with snowmobiling, you’re going to love it. There are many snowmobiles for sale, and ...